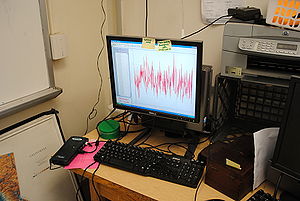 Measuring the amount of background radiation

As everyone who gets any exposure to news knows by now, the massive earthquake that struck Japan a week or so ago has caused an emergency at the Fukushima nuclear reactor complex.  Recently it was discovered that radiation leaking from the plant has contaminated the local food supply, but one thing that’s causing some worry for residents here on the western coast of the United States is that the winds may blow some of the radioactive material released from the reactor towards the U.S., such as the various radioactive isotopes of iodine and the dangerous cesium-137.  So, my Chemistry teacher and I thought, why don’t we run a little experiment to see if there is indeed an increase in radiation?

Cue our little setup pictured above.  It consists of a standard Geiger counter connected to the DIGI/SONIC port of a Vernier LabPro Computer Based Laboratory (CBL), which in turn is connected to a computer running the Vernier LoggerPro software.  The software was then set to poll the Geiger counter for measurements every 30 seconds, resulting in a value for background radiation levels displayed on the computer screen in counts per 30 seconds.  From this, it’s easily possible to convert to the more standard unit of counts per minute (cpm) by simply multiplying by two, although a perhaps more accurate way of converting would be to average the results of two 30 second scans.  We currently have this set up to run through the weekend and probably through next week.

With this data, we plan to look for any upward trend in background radiation that might be indicative of radioactive material coming onshore.  Although we do have some data from a couple of years ago that we could use as a baseline for “normal” background radiation, this probably would not be conclusive since there could be other variables involved. 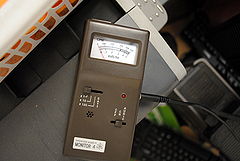 The Geiger counter used for this experiment

From the data we’ve gathered so far, it seems that the current average background radiation is between 15 and 30 counts per minute, with one spike as high as 40 counts per minute.  And, before you start panicking, this is nowhere near the level that would be even remotely dangerous to humans, and it most likely will never reach such levels here in the U.S.  Indeed, at this point, I can’t even say whether or not this is actually higher than “normal” background radiation.

Well, that’s all for now.  I’ll be making another post when I have some data, so check back soon!
—
—FastLizard4