This page is still a work in progress!

OTRS, short for Open-Source Ticket Request System, is an email helpdesk system that LizardNet uses for various customer support applications - for example, to allow operators of LizardNet Minecraft servers to respond and send emails to players. This page attempts to document how to use OTRS. OTRS is, admittedly, very complex, but only in that you have to know how to find the functions you want to use - in other words, it's very easy to get used to the system!

Herein, users of OTRS responding to emails and such are referred to as "agents", while the people sending those emails and asking for support are "customers".

Finally, note that all timestamps in OTRS are in UTC.

Accounts can only be created by FastLizard4. An account requires three pieces of information: 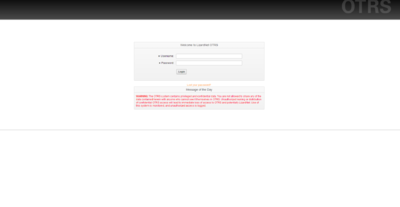 To log in to OTRS, navigate to https://otrs.fastlizard4.org in your browser and enter your username and password. Simple, right? Just remember that if this is your first time logging in to change your temporary password to a new one! Remember to use a strong password. 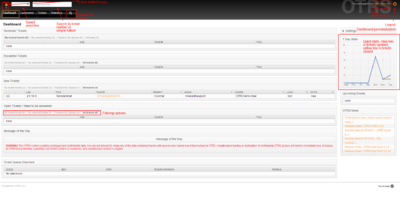 The first thing you'll see after logging in is the dashboard. The three most important things here are the lists "New Tickets" and "Open Tickets / Need to be answered". New Tickets is a list of new tickets that no one has yet looked at - that is, new emails from customers. Open Tickets is a list of tickets that someone has already claimed or an agent has either opened him or herself or has already responded to, but the customer replied. Usually, these tickets are locked to the agent that was handling them, and to filter the list to ones locked to you, select the "My locked tickets" filter. We'll talk more about ticket ownership and locking later. But, for now, know that when you click on a ticket in this list, you'll be directed to the ticket Zoom page.

There are also some buttons at the top of the screen you should be aware of:

Due to the nature of the information handled by OTRS, which is strictly confidential, please never use OTRS on a public computer, and always log out of OTRS or lock your entire computer when it is unattended. 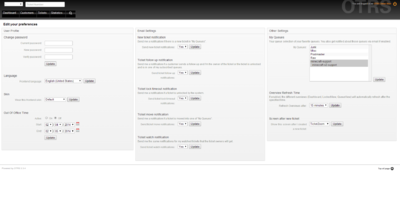 The user preferences screen contains some important settings you should look at before starting to use OTRS.

You will want to change your password, of course, after logging in for the firs time, to something that's not the default temporary password

Under "Email Settings", you can configure when the system will automatically email you - for example, if a new ticket is opened in one of your queues, or if a customer replies to a ticket you're the respondent on. In either case, you'll also need to define your queues under the "My Queues" header - control-click to highlight the queues you want to watch, then click Update.

Finally, if you are going to be away from your duties for a while, activate Out Of Office Time so other agents know that you won't be available.

To handle a ticket, simply select it from one of the lists on the Dashboard. The first thing you'll see is: 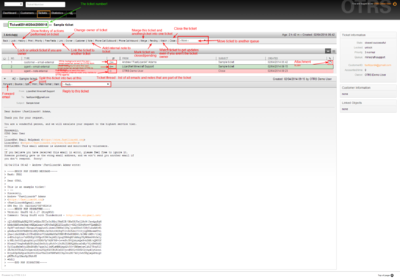 The ticket zoom screen (click to expand and show annotations)

The ticket zoom screen is the screen seen when opening a ticket, displaying its contents and information about it. The central part of a ticket is the email thread, a record of emails to and from the customer as well as internal agent notes. When a ticket is "locked", only the owner (indicated in the sidebar to the right) can send emails to the customer, though any agent may add a note to the ticket. In addition, when a customer replies to a closed ticket, it's automatically reopened and locked to the owner.

We will cover some basic ticket operations here.

It's possible to link two tickets together so they show up under each other's "Linked Objects" section. To do this, click the Link button near the top of the page and supply the ticket number of the ticket to be linked to. The only effects of this functionality are cosmetic.

Click the "Owner" button to change the owner of the ticket.

To add an internal note to the ticket, click the Note button. Note that notes cannot be seen by customers, only by OTRS agents.

If you feel a ticket is a duplicate of another (or continues another ticket when it really should be the same ticket), you can merge the two tickets together so that the various emails and notes of both tickets appear to belong to the same ticket.

Conversely, if you feel that a thread has now diverged to a different topic, you should split the thread into two tickets at the point of divergence.

Unlike linking, this also affects the tickets' presence, in addition to creating the cosmetic link.

Tickets can be moved to different queues using the "- Move -" dropdown box. This is, for example, if you think that a ticket is off-topic for the queue it landed in and would be more appropriate for another queue (for example, a Minecraft question in the queue for Starbound).

Simply select the destination queue from the dropdown and the ticket will be moved.

Any tickets that are obvious spam should be left unclosed and moved to the Junk queue. 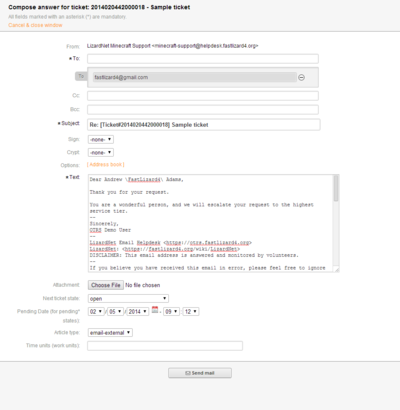 For each email-external item in a thread, there is a "- Reply -" dropdown and sometimes a "- Reply All -" dropdown. From these lists, you can select from a variety of templated responses, or simply "empty response" which does not load a template.

Of course, if you choose to send a templated response, you can (and often should) edit the templated reply before sending the message.

When you send a reply, you have the option of closing the ticket, but we'll get to that in the next section.

When sending a reply, you have the option of adding attachments to the email that will be seen by the customer. Please use this feature sparingly. You should also not touch the subject line, unless you have just merged or split the ticket before replying - and even then, you don't need to change the ticket number in the subject, just the text following.

Finally, when sending a reply, you can ignore the work units option, but never change the article type!

At any time, an agent (or if the ticket is locked, the ticket's owner) can close the ticket. Most often, this is done when a reply is sent - in fact, tickets should always be closed once replied to. The ticket will automatically reopen if the customer replies.

Tickets have the following possible states:

Any of these states can be chosen on the reply to ticket form, but from the zoom page, if you want to change a ticket state to one of the "closed" states you must click the "Close" button, and to close to one of the "pending" states you must click the "Pending" button. Also, when closing a ticket from the zoom page (as opposed to the ticket reply prompt), you have to enter something for the internal note used to indicate the ticket close - but if the reason for the close is obvious, just type a single period in the text box. 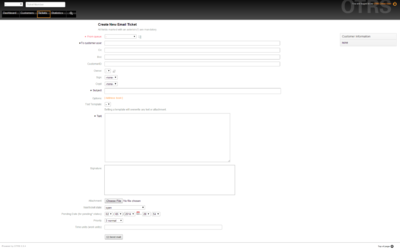 Sometimes it's necessary to create a ticket to initiate conversation with a customer. To do this, click the "Ticket" button at the top of the screen, then click "New email ticket". This screen is a lot like the ticket reply screen, but with some important differences. This section assumes that you've read all the above and have basic familiarity with OTRS.

Once you have opened the new ticket screen:

After creating a ticket, you will be (by default) taken to the Ticket Zoom page for the newly created ticket, unless you changed the relevant option in your user preferences.

Dealing With Spam (and Ham)

The OTRS mailserver, phazon.fastlizard4.org, like all LizardMail servers, runs a MIMEDefang milter and SpamAssassin. Every message incoming to OTRS is first analyzed for its spam status before being handed over to OTRS.

OTRS will then analyze the X-Spam-Score header left by MIMEDefang and automatically place messages with a score over the threshold (currently 5 points) into the Junk OTRS queue, preventing new ticket email notifications from being sent out (unless, for some reason, you deliberately specified the Junk queue as one of your "monitored" queues in your preferences...). Note that OTRS does not care about the *****SPAM***** prefix placed in the Subject line by MIMEDefang; it only analyzes the X-Spam-Score header.

Messages automatically relegated to the Junk queue are left marked as in the "New" state. This is to give agents a chance to review the Junk queue for good emails ("ham") accidentally marked as spam. Every day, at 00:00 UTC, a script will mark tickets in the Junk queue created more than 24 hours ago as in the "Removed" state, hiding them from normal view (they can still be seen by going to Tickets > Status View, though). Thus, the ~24 hour period before a Junk ticket is marked as "Removed" is the best time to screen for false positives, however, missing the 24 hour window will not mean the loss of the ticket. "Removed" Junk tickets can still be viewed until they are permanently deleted: Every week, on Sundays at 00:00 UTC, a script will automatically permanently delete any Junk ticket marked as "Removed" one month (or more) ago.

If you come across a Junk ticket that's actually ham, move it out of the Junk queue into the correct queue. This will prevent OTRS from taking automatic action on the ticket, unless it's moved back into the Junk queue. If you reply to a falsely Junked ticket, remember to remove the *****SPAM***** prefix added by MIMEDefang from the Subject line of any replies you make against the ticket!

Finally, as with all emails SpamAssassin finds to be spam, MIMEDefang will automatically attach to emails marked as *****SPAM***** a text file, SpamAssassinReport.txt, detailing what caused SpamAssassin to assess the email as spam. You can view the file either by downloading it from OTRS, or by viewing the raw contents of the email by clicking the Plain Format button.